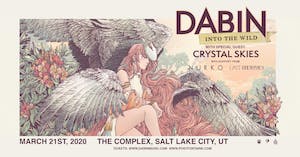 This show is POSTPONED.

When a new date is announced, there is nothing you need to do: your tickets are valid for the new date and you will be notified.

If a show cannot be rescheduled once the moratorium is lifted, a refund will automatically be issued to the credit card used for purchase, within 30 business days.

Dabin is a JUNO nominated music producer/instrumentalist from Toronto, now located in Montreal. Having spent his teens learning to play the piano, drums and guitar, Dabin started producing electronic music in 2011. He quickly attracted the attention of Kannibalen Records and released his first tracks on the ever growing independent label only a year later. Now Dabin has increased his exposure by supplementing releases with Mr. Suicide Sheep’s label, Seeking Blue.

Dabin has gained millions of plays while refining his musical style into what it is today. His “Wild Youth” LP has seen Dabin solidify his signature sound which blends acoustic elements with electronic ones through a dance-pop lense. His high level of musicality has caught the ears of collaborators including Illenium, Seven Lions, SLANDER, Said the Sky and Black Tiger Sex Machine.

Dabin had his biggest year yet in 2019. His sophomore album and its subsequent tour were major milestones in his developing career, which was followed by direct support on Illenium’s Ascend Tour. He’s losing no steam as we hit 2020, where he has numerous collaborations and originals in the works. 2020 will also see Dabin’s new tour come to life where he will take his genre-defying live show to the next level with full production to compliment his instrumentation and mixing.

Venue Information:
The Complex
536 W 100 S
SALT LAKE CITY, UT, 84101
Hello. We are working really hard to get reschedule information for all the shows coming up that are affected by the current situation. As soon as we get information for the rescheduled dates for each concert, an email will be sent to all ticket holders and we will also update our website, and our Facebook Page. We appreciate your patience and understanding during this time and we look forward to seeing you soon. Until then, we hope you stay safe and healthy.
+